The Province of Ontario today announced further measures to slow the spread of COVID-19, including a two-week extension of the current State of Emergency and stay-at-home order.
Learn more
/

Now is the time to take action on Gypsy moths 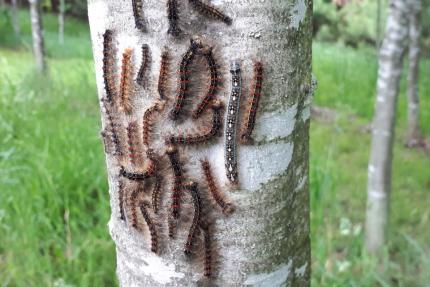 Gypsy moths are destructive pests. They get their name from their ability to travel by attaching to various objects. They appear in late July or August. Gypsy moth caterpillars (larvae) change looks as they grow. Young caterpillars are black or brown and about .6 cm (.24 inches) in length. As they grow, bumps develop along their backs with coarse black hairs. The caterpillar is easily recognizable in the later part of this stage: charcoal grey with a double row of fi ve blue and six red dots on its back. Feeding ends by early July, and mature caterpillars can be as long as 6.35 cm (2.5 inches).

Should I be concerned?

Gypsy moths are a concern because the larvae feed voraciously, mostly on the leaves of deciduous (leafy) trees, but also on some conifers (evergreens). During the larval stage, a single gypsy moth caterpillar can eat an average of one square metre of leaves.

How can I get rid of gypsy moths? 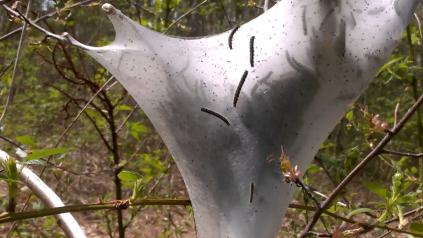 Egg masses Gypsy moths spread easily, as the young larvae can be carried by wind currents for a distance of up to one kilometre. More commonly, however, they hitch a ride (mainly egg masses) on objects like vehicles, tents, trailers, and lawn chairs to infest new areas. Vacationers, especially campers, should be aware of this and should check their equipment before moving on. It is important to be thorough when looking for egg masses as they can be difficult to locate.

When an egg mass is found, it should be scraped off with a knife and dropped into a bucket filled with hot water and household bleach or ammonia. Remove picnic tables, swing sets, and lawn furniture from around the bases of trees, because these objects provide the insects with protection from the heat of the sun.